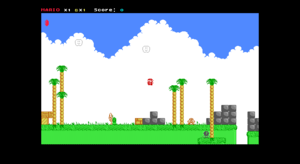 Like most Super Mario games; Mario must save the mushroom kingdom.

Super Mario for MegaZeux features over 100 enemies from the popular Super Mario series, spanning from a wide range of Super Mario games from various platforms; Some of which have never been seen together in the stage as one another.