Zombie Quest is a game made by Jauhis and Jester. The game is a basic adventure game with few minigames and a primitive RPG battle. The main objective is to roam around different locations (Junkyard, Wallmart, Jacock's Kiosk, Asylum, Forest) and collect items and/or trigger events that let you advance to the next part.

You play the role of Jermu, a town drunkard who doesn't get served alcohol in his local pub. Infuriated by these events he decides to vandalize the pub's sign. On his way to home, to plot more evil things for Pena's dismay, he gets hit by a car and thrown down to a sewer. In the sewer Jermu gets in contact with radioactive slime that turns him into a Zombie. 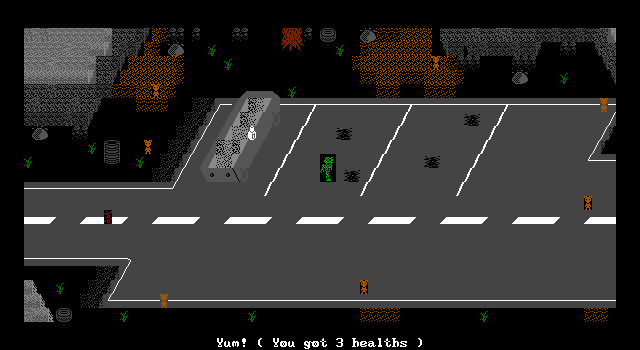 The driving sequence in Zombie Quest is one of the most hardest part of the game and has been criticized by other MZXers. The player has to avoid oil barrels while surviving 30 seconds in a randomly moving car. This part makes it almost impossible to complete the game with maximum bonus points.