The correct title of this article is western_civ. It appears incorrectly here because of technical restrictions.

western_civ is an action/RPG game set in the wild west. The story is told from a currently unnamed character, who serves as an apprentice to an outlaw. 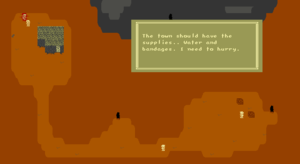 Since it was originally released as a DoZ game, western_civ is rather short. It features a linear beginning and end, but has multiple story paths. During the story, there are several battles, a few small areas to explore, and a minigame that involves avoiding fire from a rifleman.

The levels in western_civ are non-scrolling. Everything is drawn with solid colors. There are full-charset logos, and a scene from the intro was made using the BMP 2 MZM utility. The players and most items in the game are 1x1. 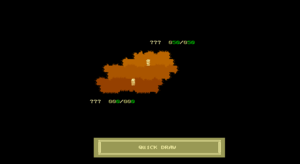 Most of the text is handled using a simple overlay engine. The battle system is called the quick draw and is mainly just pressing the number that flashes on the screen within a time limit.

Not counting the extensive amount of fixes submitted for it during the DoZ, western_civ has been patched twice.