Evan's Day in 'Nuf Said is a short comedy game. It stars Evan, who is a friend of NoahSoft. According to the author, this game is "meant to be funny, not hard".

You play as Evan, who must leave his house. The entire game actually tries to make it more difficult to leave, usually by the author stopping you. NoahSoft speaks with the Evan regularly during the dialog, and the other characters mistake him for Evan's imaginary friend. Most of the game is simply walking around the house, interacting with objects, reading the text, and watching the cutscenes.

The basic black-floored, normal-walled board design is used in EDiNS. The characters and objects are solid colored chars, and the background behind Evan's house is a scrolling checkerboard. Enlarged versions of various chars (most notably Evan) are used during the cutscenes in the game.

Once Evan wakes up, he is told by his mother, Sari, to wash up. The player is prevented from doing anything else until Evan brushes his teeth. However, the bathroom door is locked. Upon searching a nearby box, Evan finds a vacuum. He proceeds to stick his head into it (and being a smiley, that's his entire body), and finds the key to the bathroom. Evan 'busts out' of the vacuum (shown as the vacuum exploding) and finally brushes his teeth. 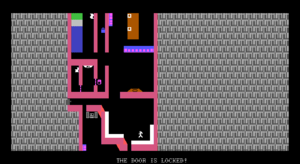 He tells his mother that he's done washing up, but accidentally swears in front of thanks to NoahSoft (who offers no help to Evan, despite causing the problem. instead, he sits on his new NoahSofa.) Sari punishes Evan by sending him to his room, and tells him to pass the time by reading a comic book. Once Evan touches the comic, he learns about a Starcraft tournament and enters it, despite being sent to his room. All of the other tournament opponents are defeated, until he reaches the final round. He is to play against Lavos_Spawn, who is actually NoahSoft. Knowing he would lose in a fair match versus Evan, NoahSoft decidedly destroys Evan's computer.

When Evan's mother finds him out of his room, everyone gets into an argument, which ends with Adrian's Dreamcast being destroyed. Thinking NoahSoft is God, Sari allows Evan to enter the living room (which is where the player was directed). At this point, Evan can reach the front door, but NoahSoft prevents him from using it until Evan talks to his cat and listens to his stereo. Once he does both of those things (and gets further injured by both), Evan can finally leave. However, he is soon smashed by a sixteen-ton weight. This ends the game.