ThDPro's first game. Gameplay only included movement-- no weapons. It features a cat whose character was never named and a story surrounding getting high on Catnip to induce a Haze so that he could find his way to leaving his dead-end town. This leads to a series of misadventures that eventually leads to the main character fornicating with a farmers daughter who let's the Main charter work for him as a farm hand to earn money because of this. While working for the farmer, the catnip he is cultivating induces a haze that when he comes to, apparently made the main character a prophet of a new religion. After this, the cat goes to a small walled in city that is oppressed into working under an evil leader, where he is caught and must eat vomit to escape from prison. After this he is killed in a fall while trying to avoid an explosion that he caused. 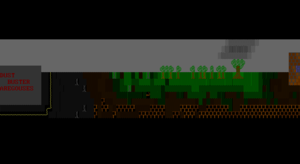