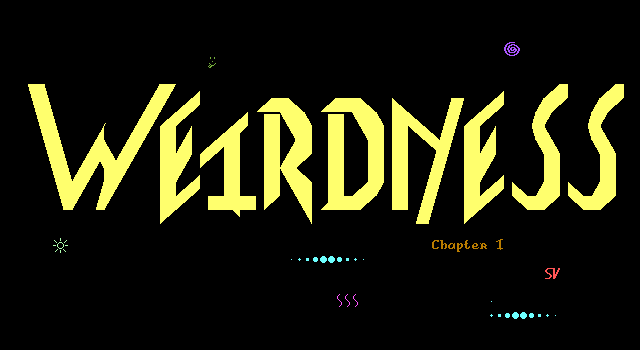 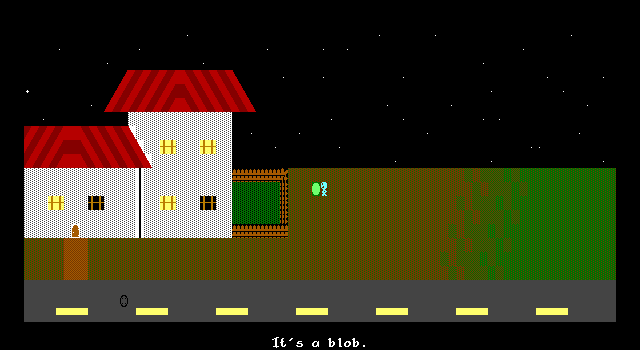 Weirdness: Chapter 1 (A 686? Is that a Pentium II?)
This is one of the most famous (if not THE most famous) game for Megazeux. It is equivalent to Mario for Nintendo or Sonic for Sega. This game with its unforgettable letter set, was one of the first in Megazeux to use the inventory system and 3D maze. In this game, you play as Jace, a young boy who must find everything he can for his inventory to eventually investigate a crashed alien spaceship. There are also a couple of puzzles for you to solve. If you are concerned about the game not living up to its title, trust me, it gets pretty weird.

Gameplay: 5/5
It may only have one little section of fighting, but the inventory (and sometimes HOW you use the items in the inventory) and weird jokes make it a very fun game to play. Another thing about it that makes it fun is that you can only get stuck 3 ways. Unless you die from the creatures, die on the 2nd puzzle, or cut the rope and go out of the treehouse before you get the candle, there is always a way to win.

Plot: 4/5
A pretty good plot. It's not a spectacular plot, but it's a lot better than most other Megazeux games. Unfortunately, we only got to see a tiny fraction of the story, since the other 9 chapters that were planned were never made.

Graphics: 3/5
This game only uses basic text graphics. It doesn't have anything near the "Amnesia" demo or the "Booskies" demos, but at least it uses many custom characters. It also has the neat light switch.

Sound: ?/5
I have no idea how to judge sound in games. If I were to force judgement on it, I'd probably be completely off from the general consensus a good percentage of the time.

Length: 2/5
The worst thing about this game is that it's short. At least it's not as short as some other Megazeux games. Although, you do have to keep in mind that it was meant to have a lot of sequels.

Difficulty: 5/5
It's pretty easy, yet difficult to find out how to use something. Wanting to get past someplace for which you haven't yet figured out the correct way will have you hooked.

Known Bugs: 4/5
It's almost bug free. I've only found two bugs. You can make the security disk without the CPU in the computer. If you crash the last two correct pairs together at the exact same time on the 2nd puzzle, it won't take you back to the main game, but this is an extremely rare occurrence.

Overall: 5/5
I know that my section scores don't average this good of a score, but Gameplay and Plot count for more than the others, and taking everything into account, you won't find many Megazeux games better than this one, especially considering its age.

Hints: Almost every item in the game will be used. Try using the lighter on "Daddy's head."
Terryn ◪ said:
Link
Posted date unknown
This was one of the most-hyped games of its time; it was unique and had charm, despite its flaws. It's a cute inventory game where you illogically interact with objects until you find out all you need to know about the meteorite which crashed next to your house.

The puzzles are middling in difficulty; there's nothing too outlandish to do, but it isn't exactly common sense with all of the puzzles. There's also a good "3D maze" and a gratifying chance to use a yoyo weapon engine, as well as a VERY quick action puzzler sequence.

This was the first in what was to be a long series (ten in total; Janson told Yapok Jr. the storyline, who told Droible much later and Droible was supposed to make the rest of the games, but that bottomed out) but this was the only one fully released. As for its SE version, sacrilege. SACRILEGE. The only good new part of it was the RoyBot; everything else was just a glossiness not really needed.

The number and bredth of new MZX tricks this game had is legion, making this game one of the most important MZX games ever. It helps that it's a great game too. Required playing.