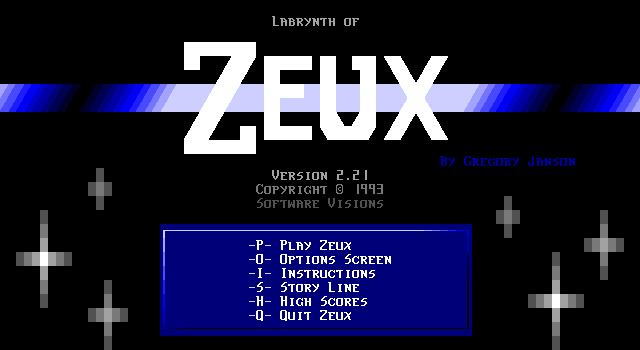 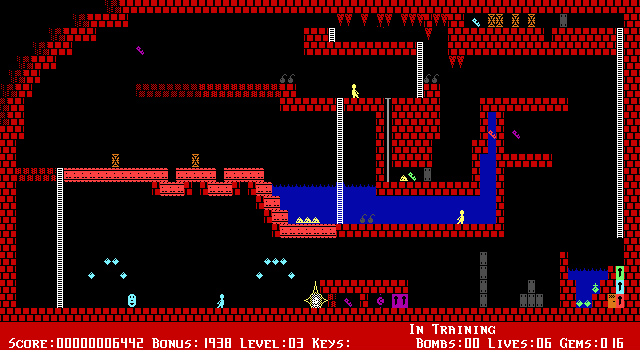 The original DOS Zeux game and the prequel to Caverns. As Vince M. Louis, enter the Labrynth of Zeux to find the legendary Silver Staff of Zeux!

MegaZeux port with new features, bugfixes, and a brand-new soundtrack as well as the original:
http://vault.digitalmzx.net/show.php?id=1854
Log in to write or edit your review.
Terryn ◪ said:
Link
Last modified 2012-07-20 02:15:50
As with all other DOS programs, it's wise to run this in DOSBOX. Game master pro obviously didn't (hence his deleted review). These days, it's hard to have a computer with the proper environs for running DOS games.

As for the game, it's a shareware game (It's now freeware; I asked Janson if I could release this as freeware and got the go-ahead.) done by one person with good level design and a splendid soundtrack... in 1994. That's commendable.

However, the level design is downright devious at times. Some levels are beyond frustrating, even for a skilled game player. The game mechanics are also less precise than many would want.

In between these, the graphics are serviceable. They're not fancy, and they're not an eyesore. They simply work.

This is the granddaddy of Zeux, so give it some respect.

ADDENDUM, YEARS LATER: For all intents and purposes, though, you really should be running the MZX port, unless you really insist on the original article.
Why-Fi ◪ said:
Link
Posted date unknown
I don't care if this game is not Megazeux, I only care about it being a great game. It's only downside it's the 50 tedious levels... ugh... I only completed it with the cheat codes, but I didn't get to see the ending... maybe one day... I think it maybe a cutscene of Vince going out of the throne room using that mine tunnel ahead... which leads to...

Great game, if it wasn't for the difficulty, it would have been 5 stars, trust me...

4/5
Giel ◪ said:
Link
Posted date unknown
Labyrinth Of Zeux is an okay game for it's time. While the difficulty is a bit much, the game's sidescroller physics and the varied built-in enemies make up for that.

The graphics are similar to MZX's in that the game uses it's own character graphics and not the bulit-in ASCII that ZZT uses.

Zeux however, has some things that are undeniably cheap. For example, it takes only one hit to kill you. Plus, anything that falls on top of you can kill you as well.