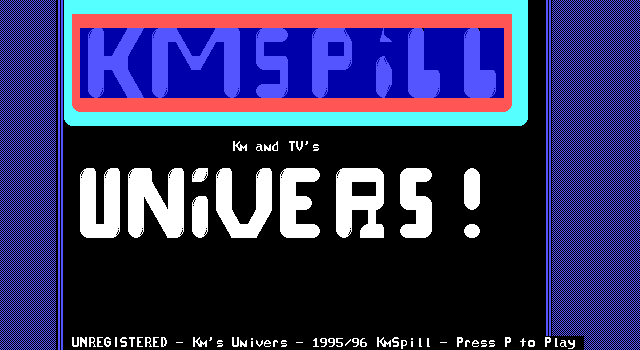 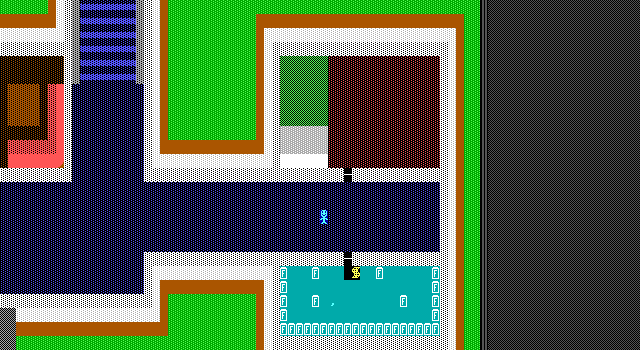  Play online
(slower PCs/tablets may have better results with this link)
No summary available.
Log in to write or edit your review.
djtiesto ◪ said:
Link
Last modified 2012-05-16 23:55:23
When people reminisce about the good ol days of MZX, they usually mean 1997-1998, the time of MZX supergroups like Autumn Dreams and New Revolution, various game releases like CANS, Darkness, Seiken Densetsu, and Orb of the Twisted. But, being around for a while I reminisce about an early time... Pre industry, pre Duky (my MZX game company), the games I downloaded when I first got MZX. KM's Univers was one of them...

KM's Univers is the story about Ole Petterson, a famous astronaut, who finished a mission involving some astro-bears (huh???), then is just relaxing at home, when a new e-mail appears in his inbox. It seems an asteroid is crashing into Earth, right into your hometown of Kristiansand, Norway. So you need to make like a corny Michael Bay flick and rocket to the asteroid and blow it up.

There is a lot to do around Ole's world, including turning into a mouse and exploring a rudimentary 3D mousehole maze, checking out a bookstore on a strange planet, or fighting one of the first multi-char bosses. The plot has its share of advances it takes, never keeping you bored, but ending on a cliffhanger (that will continue in Univers II). For an MZX game from 1995-1996, Univers boasts a fairly large world with lots packed in. Though modern day games outdo it in terms of length and content, Univers has a retro charm that's unduplicated in more recent MZX epics.

The best part about Univers is the music. The town theme sports a retro hip-hop beat that would fit in with an early Genesis Sonic game. When wandering around on an alien planet, the Freakish Town theme with its ass-shaking bassline kicks in. Several of the songs were so good back in the day I bit them for use in Engine, my first MZX release.

If I can point out the flaws, its that the graphics don't hold up terribly well, looking more like a ZZT game splashed with an overabundance of color. There are also numerous bugs in the game's script, such as untranslated Norwegian text popping its head up every once in a while. That's because, this game was originally written in KM's native dialogue of Norwegian, then translated into English. Still only a minor hassle.

Every MZXer should try this game, its one of the best examples of how things were done back in the day...
Maxim ◪ said:
Link
Last modified 2011-09-25 22:19:26
Univers was really good in its time. I mean, it had a basic pseudo-3d engine, you got a "computer" with add-ons... a large, mobile final boss.

This stuff was impressive in Megazeux circa 1996. It didn't age well, though. I'll say this first: this game is UNFORGIVING. This review might seem like it's spoiling a few games, but it's really only enough of a walkthrough that you can complete the game and still feel like you solved a few things. Basically, only read it if you're completely stumped.

If you don't complete all the tasks in Ole's house before exiting, you can't go in... meaning you'll have to go through the game without some key items. There's passwords you have to write down, and this game does not repeat itself. Like, pen and paper, the very first time these passwords appear. Or you're screwed.

If you go into space before collecting any ammo, you're better off restarting the game. Basically, the only thing you NEED to kill is the boss, but the enemies in the cave will do a lot of damage if you don't know what you're doing. I managed to get through the cave board without shooting anything, but lost a few lives in the process.

In the second town, you can buy some items: most of them actually do nothing but drain your coin count. Fortunately it's pretty easy to tell which items are red herrings if you're paying attention.

The final boss is easy, and while less bugged than most multi-character robot bosses, still falls apart eventually. If you run out of ammo against this boss you're screwed.

Basically you have to solve this game in order or risk not being able to complete it. This is Zork-level difficulty, but the game is short enough that it shouldn't take long to beat it anyway.

The computer concept is cool, especially the "e-bank" which lets you store or withdraw health and money. Too bad this game is too short and simple for it to be of any use.

Music selection is pretty good. Lot of tunes in here that sound like they were made on an Amiga.

Graphics are less good, ugly character edits and no changes to the palette to make it more acceptable. Most boards are ugly and not detailed. This kind of hurts the game, given that it's not specifically an action game. Having good scenery is more important in an adventure game like this where you have time to look at it.

This game is pretty glitchy. Sometimes the player's character doesn't change back from mouse to human properly when you use the blue potion. Boards are linked together with no regard to what's at the edges, so you might end up going to another board and being trapped in the wall or a bush. While the pseudo-3d engine is impressive for 1996, you can escape from its bounds and end up trapped.

I think this is a 3-star game. I can understand why Luke would like it enough to give it 5 stars, but all I can say is... the game isn't nearly long enough. If this game were long and complex enough to make things like the E-Bank useful, I'd rate it higher.

Still, it's worth checking out. A good, classic Megazeux game that was ahead of its time at one point.