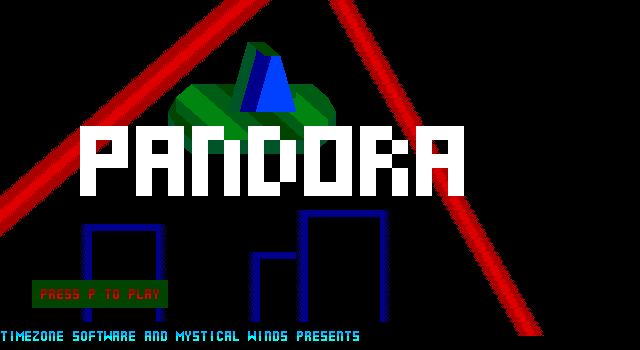 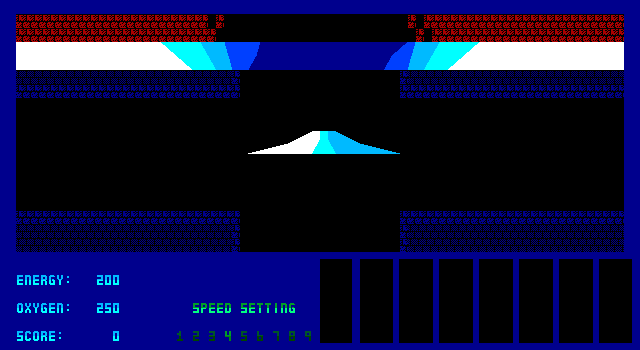  Play online
(slower PCs/tablets may have better results with this link)
No summary available.
Log in to write or edit your review.
asgromo ◪ said:
Link
Last modified 2017-07-23 20:05:15
Good game design and a brilliant pre-sprite engine are hampered by a difficulty level that tragically renders the game unplayable.

The game is meant to play like a combination of Metroid and Lander. You fly a "High Tech Earth Explorer ship" through a labrynth of side-view caverns that were built with the purpose of getting in your way. Your objective is a crystal that somehow carries the comprehensive knowledge of an ancient alien-race. On-screen the vehicle is huge and it's movements mostly fluid, a little testament to Lancer-X's programming finesse.

The graphics are generally well-done, until you hit the areas (and, in part, the intro), which are made up mostly with vast expanses of the built-in character set. Sound is sparse, and you won't turn the music off (but it accomplishes little more).

The fatal problems arise with gameplay- your High Tech Earth Explorer ship is instantly destroyed upon coming in contact with the ground, a bullet, a wall, radiation, and water (at first), regardless of velocity. It is then respawned at your entry point into the board and you lose some health. Since the areas are both claustrophobic and casually littered with hazards, you will die incredibly often. In fact, there is a good chance you will give up three boards in, where the hazards quickly become impossible to cross. Given that there is no weapon to fire and no enemies to kill, most players will become bored after the first Game Over.

It's also important to note that if you entered a board very close to the floor, there's a high possibility that upon respawning in that board you will be incapable of lifting the ridiculously heavy Explorer ship up in time for it to not crash into the ground. Then it will respawn into the same place and crash again. It is possible to enter a board low enough that you lose all of your health this way and die. It would have taken time to program scripted respawn points for each of the myriad boards, yes, but it would've improved the game immensely.

It's worth a look anyway, just to see how Lancer-X got by without sprites. The game is in fact complete, and if you lower the speed enough it's nearly playable, but it's doubtful you'll be able to perservere after the first time you get stuck or die.