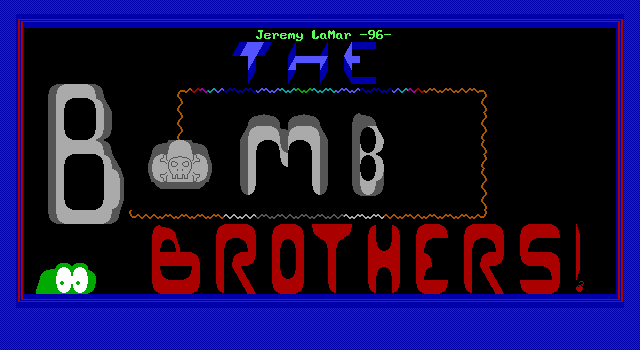 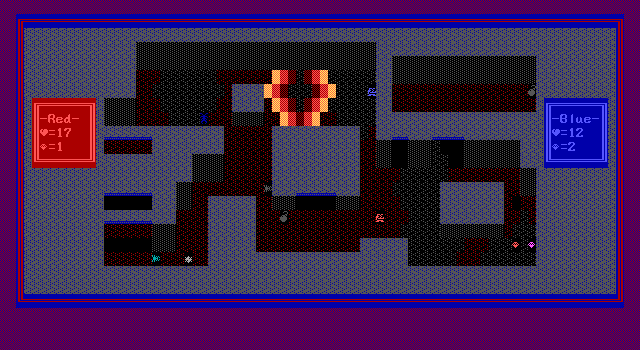  Play online
(slower PCs/tablets may have better results with this link)
No summary available.
Log in to write or edit your review.
Kuddy ◪ said:
Link
Last modified 2012-04-22 00:50:49
Bomb Brothers, created by the legendary Jeremy LaMar, was one of the first MZX games I ever played, and I have to say, I'm shocked that I hardly ever see this game referenced in the forums. This game is a masterpiece.

The most notable feature of Bomb Brothers is its two player modes. Even though it technically isn't the first MZX game to be created with support for two players (that honor goes to Spectere's Mega Blast, which never saw the light of day until April 2005), it was the first to actually be released. The game's plot simply states: "Two goobers by the name of Frenzy (the blue one) and Frisky (the red one) run amok in a subterranean world." Armed with only an infinite supply of bombs, you have the option of either playing cooperatively through 16 levels full of enemies, or going head to head and trying to kill each other. I've actually played against another person before, and even modified Frisky into an AI opponent once, and I have to say, it's pretty damn fun.

If there isn't a second player around, you have the option of going solo through the 16 level mode playing as Frenzy. I forgot to mention that if you manage to make it through all 16 levels, you get to fight an ENORMOUS boss named Glopnod. This was the first time I had ever seen this done in MegaZeux, and it blew me away. For a boss made entirely of robots, Glopnod looks really good, rarely ever breaks apart, and makes for a damn tough fight. LaMar carried this same technique over to Talon's Tale, Zog the Hunter 2, and Bernard the Bard to create most of those games' bosses. Needless to say, huge robot bosses are something he is now legendary for.

Aside from Glopnod, the rest of the game's graphics are superb. The title screen, menu, and ending all showcase some fine full-color artwork and animations of Frenzy and Frisky. In-game, the players and all of the enemies are very well animated. The levels are well designed, and make great use of overlay to make things more challenging.

I'd say the game's music is the low point. I've always found LaMar's compositions to be very chaotic, with random notes being slammed around in a different time signature than the percussion. This is most noticeable in Glopnod's theme song (DOOM.MOD). Still, Bomb Brothers' music isn't as bad as the original stuff he did for the later released Talon's Tale and Bernard the Bard demo. Thank god he used different music in the completed version of BtB. What sound there is works well. The only SAMs used are Blinky's snap in the title, and three cute voice samples used for the goobers and Glopnod. The rest is PC speaker sound effects, which sounds better in Windows MZX than it did in DOS.

Bomb Brothers gets a perfect score from me, and I highly recommend you play it if you haven't. What it lacks in plot, it more than makes up for in its excellent gameplay.