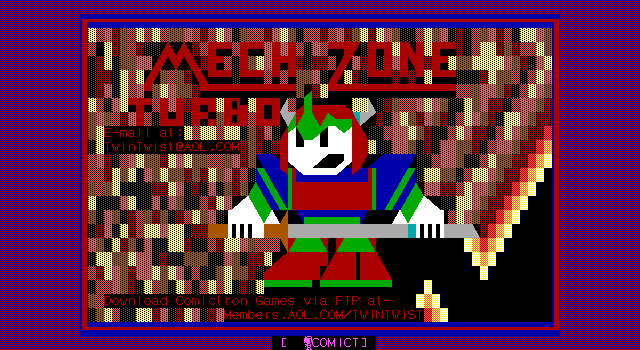 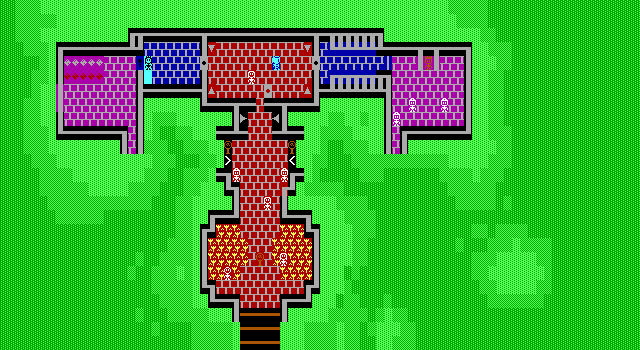 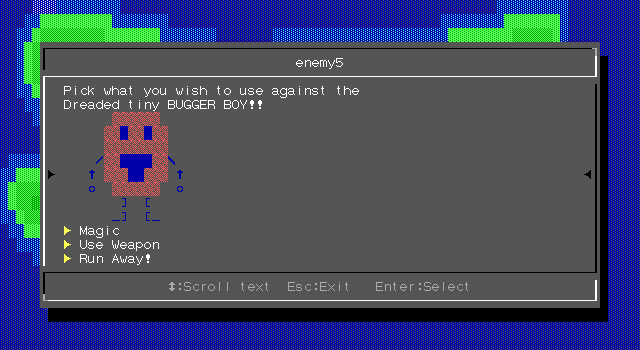  Play online
(slower PCs/tablets may have better results with this link)
Mechzone is a Role-playing game for Megazeux. It has all a MZX gamer could want, a spiffy player, comedy, interaction, Metallica, and the Macross Plus theme song! "My first walk in my dreams I could clearly see..." er, sorry. I've made many a Megazeux game before but none with the style and grace of Mechzone. Here's the plot taken almost directly from the intro-

"Zit of Oxy always wanted to be a knight. His parents criticized him for this. One day he ran away from home. He ran and ran until he arrived in a castle located in the part of the world he only knew as... MECHZONE."

Yay! I'm glad you're reading this! Most people look over documentation and go directly to the game, myself included. You, however, deserve a big gift for reading this... read on and you'll get one. (Wink, wink)

Why is this MechZone Turbo? Because there are two different versions of MechZone available. MechZone Turbo is the tuned down version. This is to not offend or scare away people.
Log in to write or edit your review.
Maxim ◪ said:
Link
Last modified 2022-12-30 07:38:05
MechZone might be the first Megazeux game with fully menu based JRPG combat. There are no examples on DigitalMZX with an earlier release date. In the game, a completion date of 11/4/96 is given. I enjoyed the game in 1997, and again after it resurfaced at the end of 2022. Sadly, it has a few major flaws that not even nostalgia can overcome for me.
Being an RPG made for Megazeux when it only supported 50 counters in robotic, it's cut down to fit. There are no support items that can be used in or out of combat, and you can only have one weapon or suit of armor at a time. There are magic commands that can be used in combat, but they require such a large amount of relatively rare gems that you won't get to use it many times. The player has a minimal number of statistics, and experience levels only increase your maximum health and sometimes allow use of another magic command.
Combat is based entirely in built-in message boxes. The enemy graphic and name, and all combat commands are on a single page message box. You have to scroll down to the command menu after every turn, which is clunky but not too bad since the built-in message boxes are fast moving.
The game is tuned mildly difficult. Some enemies have a lot of HP, and you have to spend coins whenever you want to recover your own HP with the lack of support items. The difficulty curve is sharply inverted. You may die a lot on the first few boards, but by the end you will be overpowered. The difficulty is somewhat mitigated by a bug where the player often won't die if an attack does more damage than his remaining HP, but eventually something will kill you if you don't pay attention.
There are a few awful bugs at the end of the game: one of the final areas is surrounded by unavoidable lava, so you'll have to be leveled high enough to survive the lava on the way in, and the way out. Also the condition check for the game's final objective is broken. Fortunately there's a built in debug feature. Press "C" and type "Jeff Stein". It should have enough features to get you through the broken parts.
The game has an interesting theme that could have only come from the mind of a middle schooler in the 1990s. There is a strong anime influence, and most of the enemies are derived from old PBS children's shows. Most of the graphics are crude but do their job. The colorful enemy graphics in battle are probably the best part. Music is all ripped, but is a little more interesting than the narrow selection of console RPG music used in many MZX RPGs. It's a mixture of anime songs and rock music. Fighting Barney the Dinosaur with Konya wa Hurricane playing in the background. It's like being transported back to the mid 90s, for real.
I'm only giving the game three stars because it's the first real MZX RPG and I personally enjoyed it. It is flawed and your mileage might vary, but it's certainly unique.