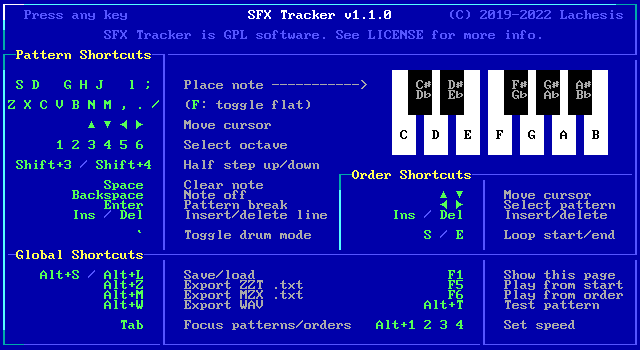 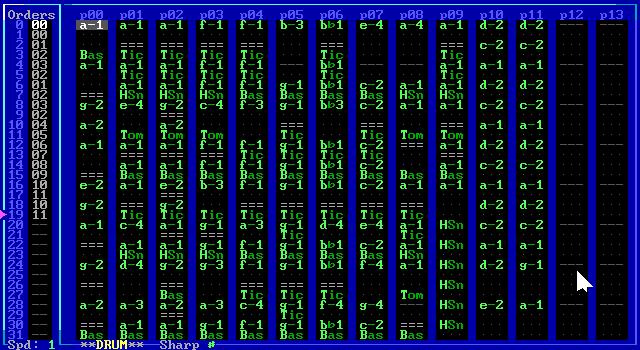  Play online
(slower PCs/tablets may have better results with this link)
A "tracker" for MZX play commands and/or ZZT #play commands. Not guaranteed to be particularly usable. Works from the web player, but it's recommended that you download it so you have access to any files you save.

All original music files from the soundtrack for Lancer-X's For Elise, which this software was used to create, are included. For Elise is available on the Museum of ZZT: https://museumofzzt.com/file/f/forelise1.5.zip

* Note keys now always set the octave instead of sometimes.
* Added extra octave+1 note keys: , l . ; /
* Moved play shortcuts to F5 and F6.
* The order list is now edited by changing focus (Tab) and using the arrow/navigation keys and S/E (loop). The mouse controls for the order list are unchanged.
* Insert and delete can now be used to insert/delete orders.
* ZZT/MZX text exports now only force the ".txt" extension, rather than ".zzt.txt" and ".mzx.txt". The filename "config.txt" is blacklisted for obvious reasons.
* INPUT STRING file selection has been replaced with a proper file manager. There are probably still a lot of bugs here.
* Moved flat symbol to char 127, fixed chars 35 and 36.
* Fixed a minor graphical bug with the drum mode display.
* Fixed WAV export bug where the RIFF chunk length was wrong.

Parts of the .WAV export code are based on code written by Exophase for MegaZeux.
There are no reviews for this record. Log in to write one!