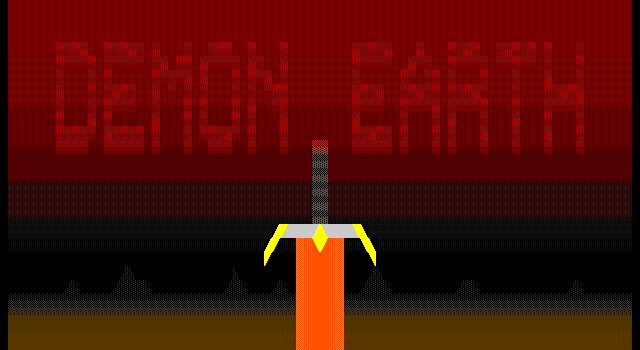 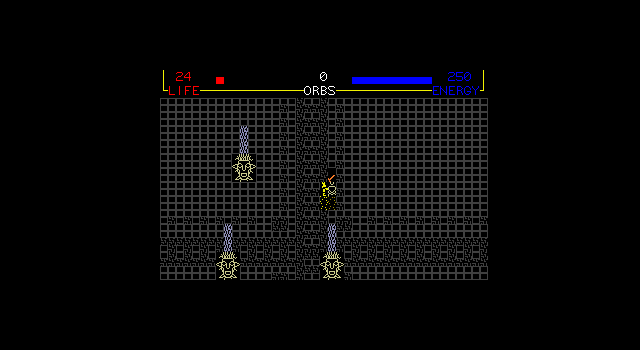  Play online
(slower PCs/tablets may have better results with this link)
No summary available.
Log in to write or edit your review.
Razerboy ◪ said:
Link
Posted date unknown
Demon Earth. This is my favourite MegaZeux game of all time. The engine is amazing, the atmosphere is great, it was 100% original, and it's so damn big that it needs a swap world. Definitely my favourite MZX game.
Taitorian ◪ said:
Link
Last modified 2012-04-27 04:15:54
A superbly executed game, Demon Earth is easily a classic in its own right, in spite of its relatively recent release. The gameplay is fun, challenging, and dispensed in reasonable doses, making it easy to pick up and put down. The game itself plays smoothly, responds in a timely manner, and has yet to bug up on me, which is always a plus. The graphics are simple enough, yet not so bland and one-dimensional that the game is boring to look at. I found the level design to also be to my liking, the mood and atmosphere of each area fitting for it. My only complaint about the game is the soundtrack, which I disliked... But not enough to knock it down from the five-star rating it deserves, especially considering that anyone can just turn the sound off.

Great game. A real must-play for any MZXer.
Baby Bonnie Hood ◪ said:
Link
Last modified 2011-09-29 15:39:40
Demon Earth is an action RPG, and it's one of the best ones you'll play in MZX. You play as a demon (not the hellish kind; in fact, the whole demon thing's just a moniker and you'll soon think nothing of it), adventuring in a dark and foreboding world in a quest to perhaps save it.

The graphics, sound, and story are quite amazing. But the gameplay is where this game really shines. There are many areas to explore, many enemies to slash and shoot, many bosses to battle, many items to find and collect, and many abilities to gain and use. And this is no shoddy work either, the overall quality of this game is very high.

If you're a Zelda fan, you'll surely enjoy this game.
asgromo ◪ said:
Link
Last modified 2017-07-23 20:05:55
Welcome to MegaZeux's dank, mean-spirited Great Nintendo Adventure, a grand quest for a marginally better future in an implausibly ugly and inhospitable world. Demon Earth is something of a flawlessly cohesive and sometimes fearsomely difficult hybrid of more or less Metroid-style atmosphere, upgrades, and setting with more or less Zelda-style combat, exploration, and overhead view.

It is steeply difficult but well-balanced and carefully curved, reasonably large (at least five hours on a first try for an average player, expanding by several more inclusive of Game Overs), and spectacularly well-designed for a one-person project in a primitive (notably more so in 2003) game creation system. It is not very pretty and does not have much of a story to tell. There is only the faintest of rewards for finishing the thing. There's variety to the landscape, but virtually no good humor or cheery scenes to be found. You the player are trapped in an aurally and visually oppressive labyrinth of living Hell-canyons.

Make it out of the first dungeon, though, and you'll probably want to see it through to the end. The fully revealed map is a sensible three-dimensional universe, as though 2D Zelda's split-reality overworld and dungeons were merged and scale-normalized. There are dozens of secret rooms and stat boosts to uncover, a varied bestiary of hideous freaks and semi-charismatic bosses hailing from all corners of the eukaryotic domain upon which to effect your sword and long-range spirit shots, and a grand assortment of power-ups and items to win, buy, or uncover...

Progress through the game is alternatingly aided or made by finding the 22 special purpose Fragments-- Fire, Ice, Quick, Sharp, Stone, Exploder, etc. You equip up to three Fragments, one to one of the player character's three slots: Body, Sword, or Spirit, to grant a unique effect to each category. Fire makes your Body fire-resistant, or your Sword/Spirit shots do more damage to ice monsters. Quick raises movement or weapon speed. Stone turns your sword into a heavy high-damage club... or it prevents player movement (except attacks), quickly draining your health but making you invulnerable to otherwise overwhelming enemy attacks. Is every combination useful? The experimentation here isn't even entertaining in its own right, but it's better than that: seamless, logical, and tight. It makes every battle and room a puzzle to find every secret and to conserve as much health and energy as possible. It upgrades a sullen dungeon crawl into an involving adventure.

I argue that in scale and complexity D.E. remains unmatched in MegaZeux. Despite the abrasive darkness and deliberate lack of hope, Demon Earth is a fun challenge, and worthy of attention.
Lachesis ◪ said:
Link
Last modified 2021-01-20 08:32:19
Demon Earth is the best Metroid game since Metroid 2 in that it articulates the mean, repressive atmosphere the first two games presented more effectively than any Metroid game that has come out since, so for the remainder of this review I will act as if it is a legitimate entry in the series.

In this installment to the Metroid franchise, Samus Aran has been transformed into demon and is recruited by a god to save Earth from ZeromusZodimus. From the first few minutes you control her on the planet, you realize that this game is not going to play nicely, and in fact that every single thing on this planet wants to see you dead. If it's your first time playing, you probably already got killed by a trap monster in the wall.

You spend most of the game chasing around Zodimus' goons, your evil rival demon Kangarr, and collecting crystals that augment your sword, armor, and ranged spirit attack. Most of the implementations of the crystals are very clever.

There's not much more I can write about Metroid 5: Demon Earth that hasn't already been covered. The story is a little mediocre but the atmosphere is really the most important thing here. The game has a handful of elusive bugs but nothing significant enough to mention here. If the final boss seems impossible you're not using the right combination of crystals. Keep trying!

edit: there is a softlock bug that can occur during the first screen transition after you arrive on Earth. To avoid it, save immediately when you reach Earth and don't hold left after that particular screen transition starts (subsequent screen changes are not affected).