I Dwell in Possibility 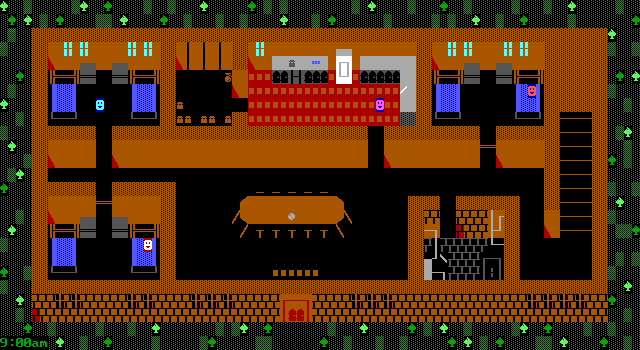 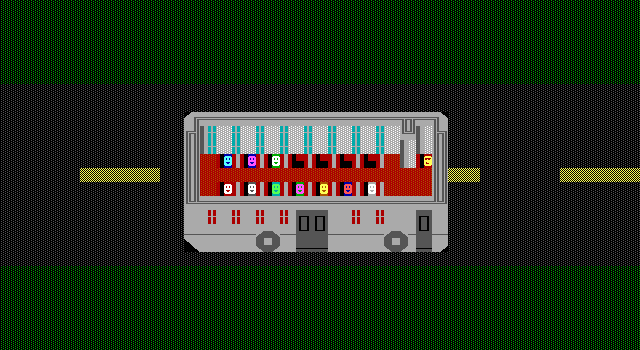 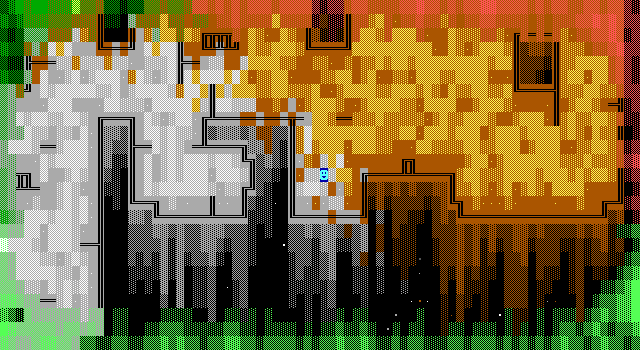  Play online
(slower PCs/tablets may have better results with this link)
A MegaZeux game, previously submitted to the The Story Buffet.
Log in to write or edit your review.
Maxim ◪ said:
Link
Last modified 2021-04-12 02:46:08
I Dwell in Possibility is a great game. A brilliant game, even. It is also not an easy game to explain. Actually, I recommend diving into the game without reading this explanation if you're patient enough. Figuring it out is a fun experience. But if you find it overwheming, read on for an explanation of how the game works.

In essence, it's two games on top of each other, where your actions in one game affect the other. The first game is a murder mystery adventure based on Sleuth, which loops endlessly until you solve all of the game's goals. It involves a trip to a cabin in the woods with nine of the player's classmates where one is murdered at a certain point. The other game is an RPG using the characters from the first game. It's used in its own way to advance (or rewind) the game's story.

In the murder mystery part of the game, your main goal is to develop friendships with your classmates. There are several ways to do this, which are explained in scrolls at the start of a loop. After you begin to develop a friendship with a classmate, you can take them into the RPG and use them in combat.

The RPG part of the game takes place in a giant area called the aetherspace. Portals to the aetherspace appear in different locations in the cabin at different times. Your main goal in aetherspace is to become powerful enough and find enough equipment to survive boss battles. The game's battles are menu based, but most fights are over quickly if you use the right attacks.
Party members and their weapons have a great deal of customization options that become available as you level up. There are 9 customization paths for characters that will give different magic attacks and skill buffs. You choose the player's customization path at the beginning with a series of questions reminiscent of those at the start of Luke Drelick's Kikan. Each of your classmates has one of the 9 types already assigned.
Any one character that you have a basic friendship with can be taken into the aetherscape if you ask them to help you search for clues. The classmates you have a more advanced friendship with can be summoned using summoning stones that you get in combat. Characters can also be temporarily combined, but this eats up more summoning stones. These stones aren't scarce, but you have to manage them so you don't run out and become unable to summon your party.

You can also go forwards and backwards through time in the murder mystery game in the cabin by entering one of the many portal littered throughout the aetherspace. That's not as straightforward as it sounds: you will also likely end up in a different timeline where your classmates take different actions and you may find yourself with a new roommate. The portals take you further into the week as you go toward the center of the aetherspace (direction indicated by the red part of the halo around the screen).
It's best to remember which portal you entered through if you're following the instructions you received in the player's home on the first board. Staying with a different timeline will likely invalidate the original instructions. Changing timelines becomes more useful later in the game where you need to be at a certain day in the cabin to tie up loose ends. You can go back and forth between portals until you find the set of conditions you need.

If all of this sounds intimidating, the game is much more forgiving than it sounds. The worst thing that can happen if you die in the aetherscape or fail to solve the mystery is starting back at the player's house--where you will typically receive another helpful hint. There are multiple endings if you feel like ending the game early, but you have to complete the given goals for every classmate for the best ending.

There are no edited graphics in the game. It uses the stock Megazeux character set, palette, and PC speaker sound effects. However, it uses them to good effect. None of the game's locations look like a jumbled mess except the aetherscape, and it still looks like a beautiful, colorful mess. The music selection is a bit eclectic but the individual pieces fit where they're used.

There are a few bugs in the game, but I haven't encountered any fatal errors. The worst bug I ran into had a player turn into an enemy during combat, but the game worked fine afterwards.

Give this game a chance. It's not too hard to figure out from going in blind, but it may take a couple of loops to fully grasp. If you're really stuck, here are a few hints. I recommend not reading them and instead figuring out the game on your own, but here they are if you need them:

- Save the game often (use the built-in F3/F4 save function), and save in different files. This way you can experiment with a certain course of action and roll it back if you don't like the results.
- Write down or take screenshots (press F12) of the information the game gives you at the beginning of loop, and do the same for both floors of the cabin the night before the murder. There is a lot to remember, and no built-in function for photographing clues.
- Spend more time on the first few loops talking to everyone and looking at objects. You have to figure out what to do with the basement, but this may take a few loops.