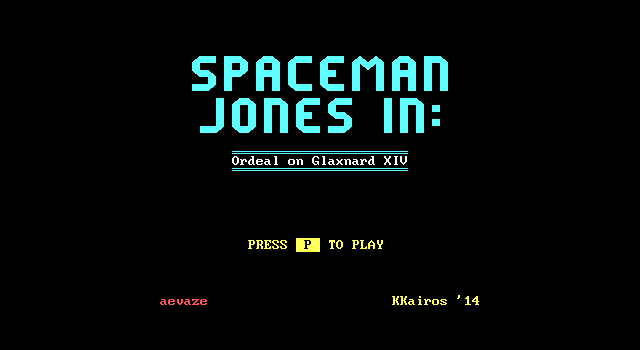 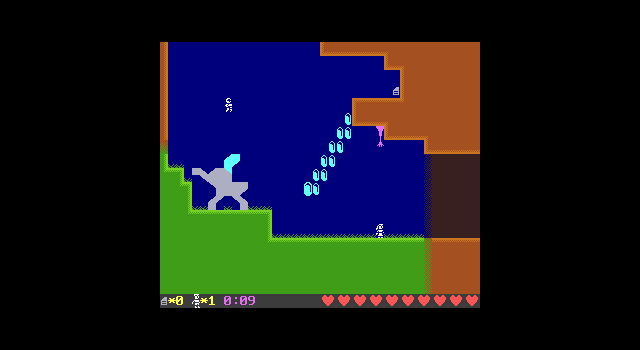  Play online
(slower PCs/tablets may have better results with this link)
Join Spaceman Jones in a quest to rescue Princess Skye from arbitrarily hostile aliens!
Log in to write or edit your review.
Maxim ◪ said:
Link
Last modified 2014-02-17 00:33:37
Spaceman Jones is a platformer where you try to achieve the game's objectives as fast as possible. You have to rescue some people stuck in pods, find keys and an item, and dodge turret and laser fire.

Most of the game is spent fighting with stationary turrets and lasers rather than moving enemies, which along with the time limit gives it an obstacle course feel.

There's also at least one hidden health item in the walls of the dungeon.

Graphics, music and sound are simplistic, but still fitting enough... and there's a few cool graphical effects for some events.

It's a small, simple game, but doesn't need to be more than that. It's also pretty forgiving--you have infinite lives and your score is based on game completion time. The program itself is also pretty solid. If there are any bugs, I didn't find them.

Very good.
Bramble ◪ said:
Link
Last modified 2014-05-15 07:09:58
This was a solid little game. Something that may not be reviewed often is the story/concept of the game, so here goes: I liked how you are the proverbial princess saving the prince. It made me want to go ahead and play through the whole game.

As far as gameplay goes, I thought the options for switching controls at the start menu were thoughtful. I also liked how smooth the jump engine felt. I liked how I got to keep on trying to beat the game again and again (although I pretty obviously did not get a high score) because that gave me some time to get good at jumping up and down and shooting badguys who liked to pop up out of nowhere. It's a fun jaunt of a sci-fi sidescroller. Try it out!

I give a 4/5 because this is a good sidescroller short game, but it the concept is not DMZX-ground-breaking and the gameplay is only varied as such as short game would be.
CHAOS 256 Colors ◪ said:
Link
Last modified 2018-03-27 16:35:49
Spaceman Jones is cool!