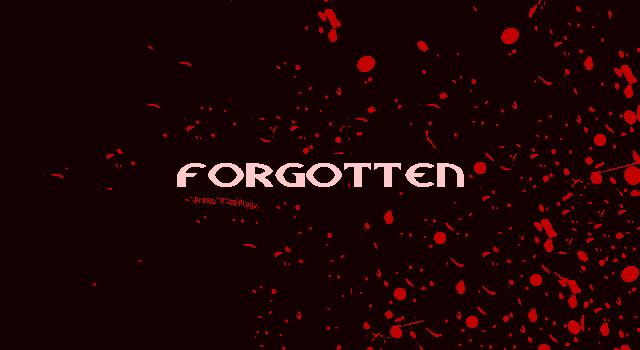 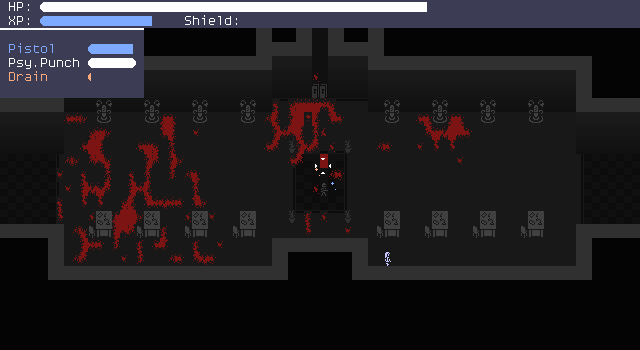 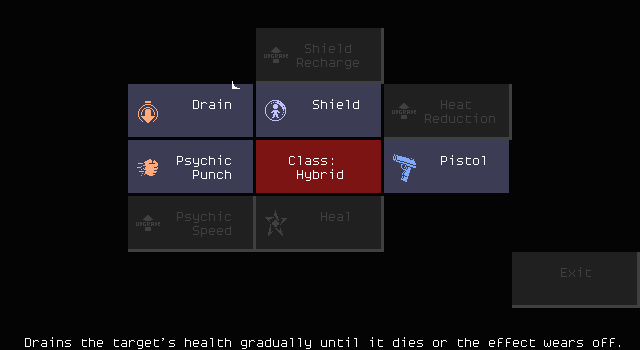  Play online
(slower PCs/tablets may have better results with this link)
Forgotten is a short top-down action RPG focused on atmosphere and customization. The player controls the protagonist with WASD and the mouse.

You start off with the choice of different skill-sets, each with their own perks and downfalls, and each unique from the other. Once I'd made my choice the first time playing this game, I went to the next room only to get owned by 4... Zombies? I dunno. Like I said, the game doesn't seem to provide even the excuse of a story, but given it's wildly short length, I can just overlook that. ANYWAY, the mechanic took a minute to get used to, I wasn't sure what I was supposed to be doing with the cursor, which now seems like it should have been completely obvious: YOU AIM WITH IT. It points out where your attack falls.

On the note of the cursor, I'd like to point out that the thing is pixel precise and VERY easy to control. Not since Pandora's Gate have i seen a mouse interface work so well in MZX, and even then, PG it wasn't a frantic real-time action battle like this, so that's an accomplishment on it's own. It doesn't distract, you don't fight with the interface, you don't even think about it, it just... Works. I don't know why I'm surprised by that, but I am.

Also worth noting is the enemy design: it's impeccable. The enemies tend to move after a set wait time and as a group. This seems at first to be kind of choppy and somewhat simple, but the idea behind the AI is totally sound once you get to the third level: with multiple types of enemies, all closing in on you in chucks at a time, you find yourself trying to not align yourself with the enemies that shoot bullets while dealing with the slower enemies and there's still barely enough time to make decisions in the wait time of their movement as a whole. It's a REALLY good idea that anyone looking to make any kind of AI in mzx could learn a lot from. Also, they are introduced in a good arc to make the game learn-able and playable, but are still difficult on your 3rd round through.

On the note of multiple rounds, this is most re-playable game I've come across since TI2, and it's even more re-playable than that. However, for a game this short, that is absolutely essential.

This game has 9 gameplay boards. None of them take particularly long, some of them take just seconds. That is this game's major downfall: Brevity. I can see this engine or iteration thereof, perhaps a larger and deeper engine, going miles further than this game went. For the length, the engine was tailored to work out so that you'll end up with all upgrades by the end of the game. This is a good idea and is executed flawlessly, I just want to see more game here, and I know it could be more, but it just isn't. That's where it misses the star. That and the story. Which is... Where?

Worth playing, replaying, and replaying 8 more times. 4/5 Stars.
GetDizzy ◪ said:
Link
Last modified 2013-07-31 05:07:10
NOTE: This review was written for version 1.1e and may be outdated.
Forgotten is a brief but awesome top-down cover action game with some interesting RPG elements. The different styles of play, from Soldier to Psychic to Hybrid to Expert, offer great replayability. The cover mechanics add a lot of depth to the gameplay, forcing you to think instead of charging in head on. The minimalist environment suits the game well, and the final boss fight, with its epic musical accompaniment, manages to be both simple and yet unforgettable. There's a hint at something more lurking behind the untold story of this game, and I'd certainly like to see some of that in a sequel. All-in-all, a perfect example of a short-but-sweet, action-packed but cerebral MegaZeux game.