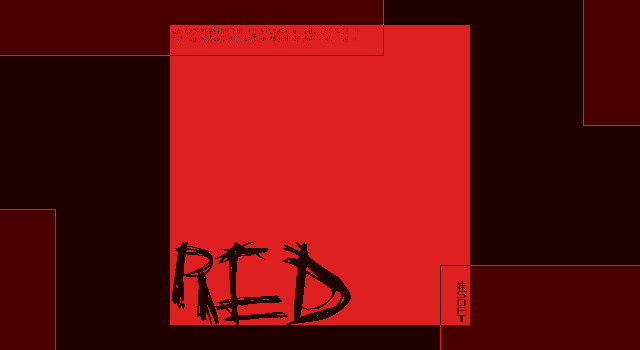 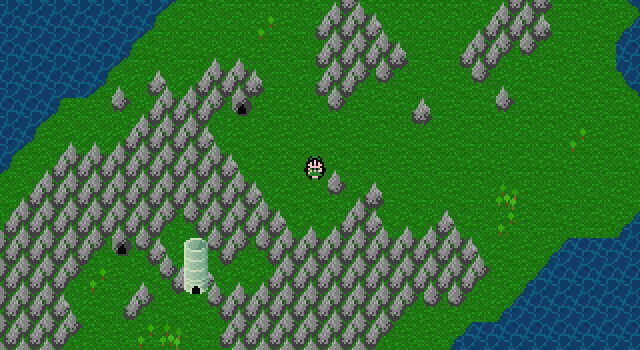 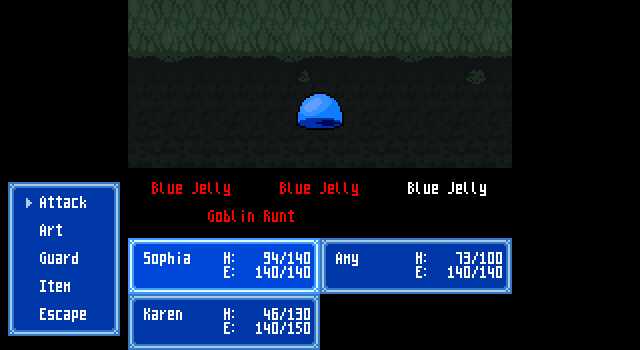 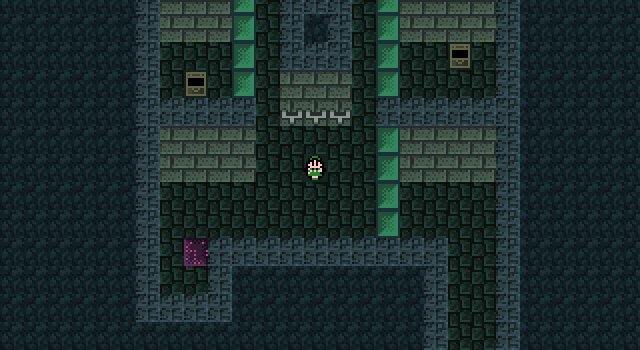  Play online
(slower PCs/tablets may have better results with this link)
red is a top-down classical RPG with turn-based battles.

A lo-fi version (with reduced quality music and sound effects) is available for those with limited bandwidth, but it is not really recommended as it is rather hard on the ears.
Log in to write or edit your review.
Baby Bonnie Hood ◪ said:
Link
Last modified 2013-09-23 14:56:40
I'll say it right away: This is the best MZX RPG of 2013, possibly the best ever.

Red is an RPG in the style of old 2D dungeon crawlers: top-down view, up to four characters, and a whole lot of exploring, fighting, and leveling up. And it's one of the best ones you'll ever play.

Graphics are, well... just look at the screenshots. SMZX mode is used to great effect, making the game look like it belongs in the SNES; not to mention all those particle effects. Music and sounds are high quality as well. Heck, all of the audio and visuals are excellent; would you really expect anything less from Lancer-X and team ImoutoSoft?

As for gameplay, it's pretty much typical RPG fare. There are towns with inns, shops, and NPCs, an overworld map to traverse, and dungeons full of tough puzzles and bosses. You engage monsters in classic turn-based battles. There's even optional areas that aren't needed to complete the game, but are there anyway for that extra challenge. And to top it off, there's a wide variety of stats, items, spells, skills, buffs, debuffs, and enemies (and a lot of recolored enemies too). It's all quite complex, and all handled perfectly with little to no bugs.

Finally, the plot is also pretty much typical RPG fare. You've probably seen all this before: You wake up with no memory, you learn of an apocalyptic event, you set out to stop it, you gather a party along the way, and what follows is a slew of towns, caves, dungeons, towers, mazes, and more. There's a big plot twist, there are even flashbacks, and of course the final boss is battled in another dimension. As cliche as all this may be, they still tell an intriguing story; one that I really can't give away here, you just have to see it for yourself.

Overall, I'll just repeat myself: This is the best MZX RPG of 2013, possibly the best ever. Do you like RPGs? Then play this. Like now. Or yesterday.
Lachesis ◪ said:
Link
Last modified 2019-09-01 21:18:24
2019 EDIT: It's come to my attention that some people have had issues getting Natalie back and other progression issues. Here are a few pointers:

* There's no quest log or anything similar. Bring a pencil/pen and a sheet of paper.

* This is an RPG much like the early Final Fantasy or Dragon Quest games, so make sure you talk to every NPC (go into every building, etc.). They fairly consistently tell you what you're supposed to do next.

* Natalie should not be out of your party for very long. If she is, you skipped something.

* I never needed to grind, almost ever, when playing this game the first time. If you need to grind to go somewhere you're probably trying to go to the wrong place.


Red is a fairly standard SNES-era JRPG, and the longest MegaZeux RPG I have ever played, having clocked in at over 30 hours on an almost-100% run. That there exists an MZX game of that length is astounding, let alone that it held my attention for that long and still left room for replay value.

Gameplay (67/75)
The gameplay is pretty rock-solid in this game, and although the level progression does get a bit out of hand by the end of the game, the game is easily accessible and realistically finishable. The different Arts and weapon combining both contribute a lot to prevent the gameplay from getting stale. I do wish the enemies were a bit smarter, and at points in the towers the frequency of random encounters got a little tiresome. This game is full of great puzzles, and if you're stuck, I recommend checking out the release thread on the forums, where we've spoiled pretty much every one of them.

Graphics (58/60)
This game has what probably everyone has wanted to do ever since SMZX mode 2 was introduced: pleasing console-esque visuals. How Lancer-X managed to fit special effects on top of his tightly-budgetted battle graphics was wonderful, but I feel like the most impressive achievement of this game's graphics is that they are almost completely cohesive--in the battles, it's almost impossible to tell you're looking at MegaZeux, and on the overworld, the limitations of MegaZeux are undermined enough that they'll rarely bother anyone. My minor complaints are mostly regarding the overworld: when the player is on top of high-contrast background tiles, there is that unavoidable "background box", and the overworld tiles do get awfully repetitive.

Innovation (45/45)
Of of the most impressive things that this game manages to do is to be cohesive, through the graphics/style, but also through the balanced progression that really allows players to be drawn in. Once again, Lancer-X takes the most basic design paradigms and applies them to a MegaZeux game, and the result is that everyone is shocked and awed, but to me, that's a little distracting from the biggest achievement of all: not that he designed all of the technical aspects of this game, but that he actually drove himself to finish it. A 30 hour game! A freakin' 30 hour non-linear RPG is a lot of work for one person!

Plot (28/40)
The story is suitable and highly effective at times, but overall not particularly special. Mainly, it is interesting enough to draw the player through the game to see what happens next and to encourage us to find out what's really going on. Aside from the brilliantly-executed sequence where Sophia regains her memories, there isn't a lot to remember from this plot, though. None of the characters really have character development arcs--I felt like even Sophia didn't change that much from start to end, aside from her regaining her memories. I'd like to see more development in any future games like this.

Music/Sound (35/35)
Aside from one godawful sword sound effect towards the endgame, I don't remember anything particularly sticking out here. The music fit perfectly at best and generic RPG-y at worst, and is mostly credited for a change. The Sentinel boss theme is possibly the best piece of music that has ever been in an RPG.

Theme (5/30)
Sorry, Lancer-X. Your interpretation of the Clones theme doesn't cut it for me. Five points because there is at least a battle where you fight something similar to a clone.

Discretion (1/15)
Wait, Sophia is the lead developer and she wears that goofy dress to work? Do they even care about professional image at Quantum Visionaries? I am sorry, I take back what I said about the graphics, this just broke my suspension of disbelief for the entire game. I was almost convinced by the dragon, but... just, no.

Rank Weighting (100/100)
This easily tops Autumn: A MegaZeux Sci-Fi RPG and Infinite Sky: -Shooting Stars Fall Like Winter Snowflakes- by a huge margin. The rest of the competition from the RPG department so far this year has been disappointing.

Overall (339/400)
Worth playing to see how far the boundaries of MegaZeux's limitations can be pushed, but more importantly as a genuinely great, enjoyable, and fun RPG that enthusiasts will doubtlessly not mind plugging 30 hours into.