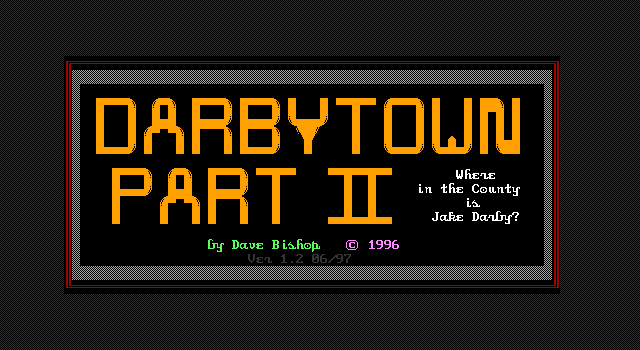 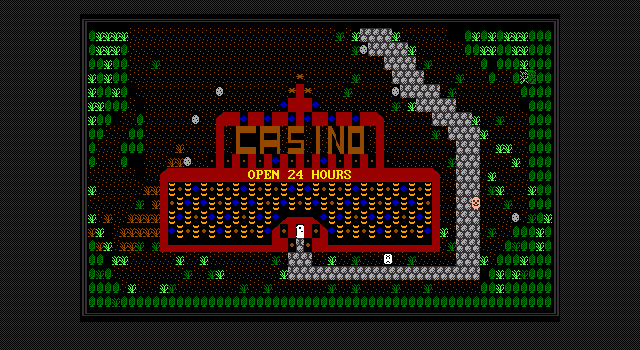 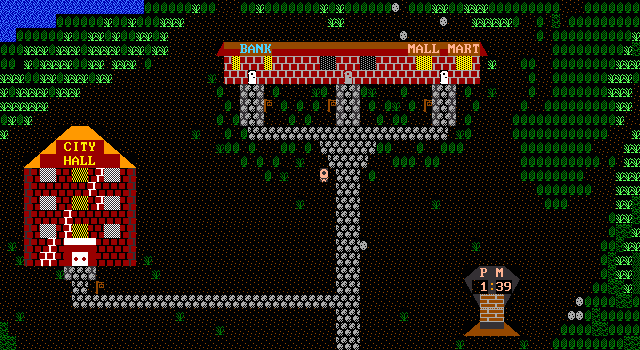  Play online
(slower PCs/tablets may have better results with this link)
No summary available.
Log in to write or edit your review.
djtiesto ◪ said:
Link
Last modified 2012-05-16 23:50:37
Darbytown II is the overlooked sequel to a rather obscure ZZT puzzle game that hardly ever gets its dues. And its a shame, because it's a solidly-constructed game with some challenging puzzles, excellent graphics for a game from 1997, and servicable music... alright, a few songs can get on your nerves, I'll admit. The majority of the game revolves on legacy ZZT-style push-block/slider puzzles, although there are several action scenes, an inventory system, and even a sidescroller.

The game has quite a bit to do and is pretty polished, definitely worth playing though I am not really sure why this game never achieved classic status in the MZX community.

Something of note: It was rumored that DNBishop, the author, was in his 50's when he made this game. Pretty crazy to think about.
samtam90 ◪ said:
Link
Posted date unknown
A much improved sequel from the original Darbytown game for ZZT. Some sequences alone are worth playing the game and, as a side note, this is the first world with a true day/night engine which even affects the gameplay. Two thumbs up!
Goshi ◪ said:
Link
Last modified 2012-05-16 23:50:29
Darbytown 2 should be the next featured game. Its nice that its actually getting some attention.

Anyway Darbytown 2 is the sequel to the excellent ZZT game. In this game the statue gets destroyed suddenly and you must go and retrieve it's pieces. Its not going to be easy though as you'll have to go through forests, seas and through the bowels of a volcano in order to restore the statue back to its former glory. Not the best plot ever but thats not important for this game.

Most of the game takes place in the town and the nearby forest. There's a motherlode of things to do in the town and the nearby forest, such as searching for stones, place the parts of the statue together, playing in a min casino of a sorts and several things. The game, like the ZZT game before it, consists a good sum of puzzles and mini games. There's a shooting gallery where you must hit the target or tigers will come and shoot you, another involves pushing colored guards which all move when one color is pushed. Another is a fairly large platformer area where you must do several things, such as stop the volcano from erupting and finding parts of the statue. The game also has a day and night system. However this only applies to the town and its more of hindrance than a neat feature. The gameplay is of standard MZX style but all the puzzles and features the game makes the game quite memorable.

The graphics aren't the best in the world, but they're simple and get the job done. The programming is about the same too. But back in the day I would expect the game to be considered legendary at the time.

Overall this game is excellent. I highly recommend everyone to play this.
Terryn ◪ said:
Link
Posted date unknown
For an MZX world written off by its author as more of an experiment than a real game, Darbytown II actually fits the "game" mold quite well.

Darbytown II is an old (later 1996) MZX game based off of a ZZT game (simply Darbytown). While I can't vouch much for how this game follows the ZZT game, Darbytown II stands well enough alone. The statue of the town's founder inexplicably blows up and the player must retrieve its parts and re-assemble the statue. The plot doesn't really advance more than this, though the author provides a nice amount of back story/history for the game's surroundings.

As for the gameplay, Dave Bishop insisted that this game was meant to be an "Experiment". True to form, there are quite a few new and interesting things done in this game. The most immediately notable piece of gameplay is that time advances in the game world, causing certain town buildings to have enforced open and closed hours. Unfortunately, the time-based gameplay doesn't advance farther than that, and mostly causes waiting or unexpected ejection from Town Hall. The player can thankfully pull most boulders, making many situations far more manageable. The last readily notable gameplay artifact is a five-item inventory limit grafted onto the game's inventory engine. While this isn't always strictly enforced (whoops), this causes a small bit of required management on the player's part. Many other then-novel gameplay elements show up during the game, and as far as experiments go, range from resounding hits to aggravating misses.

-Hit: There's a puzzle later on where there's a room full of colored statues, and pushing one makes the others go in the other direction (unless the other statues are blocked in the way they'd have to go). It's a very well-thought-out puzzle, especially considering when the game was made, and I personally prefer something like this over something like Smiley RPG's zombie baby (those damn invisible floor memory puzzles).

-Miss: The shoveling. While a decent idea, actually doing it in Darbytown II requires going to the inventory, selecting the shovel, then picking the digging option. This has to be done around 5-10 times in a row, in several patches. Fun.

Other gameplay mechanics include a shooting gallery (with the only heavy usage of stars that actually works), even more fetching, limited view exploration, a switch manipulation puzzle, and sidescrolling.

The game's presentation is fair. The music is composed by the author and mostly background fare, though a tune or two dip into the mute-worthy zone. The graphics are period; they aren't _bad_, but often look chunky.

As a whole, the game is worth playing, but suffers from the weak points of its hodgepodge nature, as well as some other issues. As one such minor issue, the game throws money out the window as a relevant gameplay factor right after the gambling portion, yet gems continue to appear in future places. I guess it's for compulsion-driven people. Relatedly, stone trade-ins appear too late in the game to be worth doing. More severe problems involve the ability to make the game unwinnable if the player forgets to pick up the statue part in the colored statue room or sidescroller (not likely, but possible) to the increasing bugginess shown towards the end: Music doesn't load in the gallery because the mod name is wrong; a char edit is misapplied in the middle of the sidescrolling section; the 4-dir player and the clock break after getting the last pieces.

All in all, this game has its flaws. However, Darbytown II has aged very well and lasts a respectable time. Worth a serious look, especially considering how few have bothered.