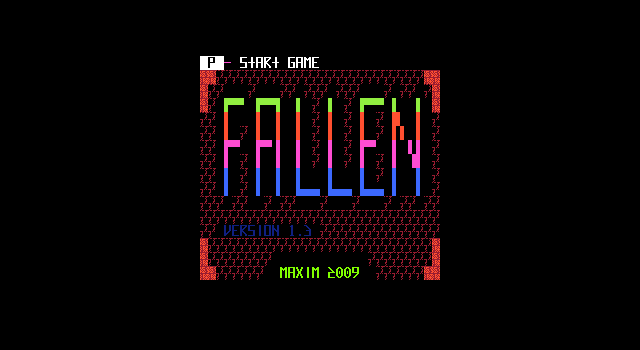 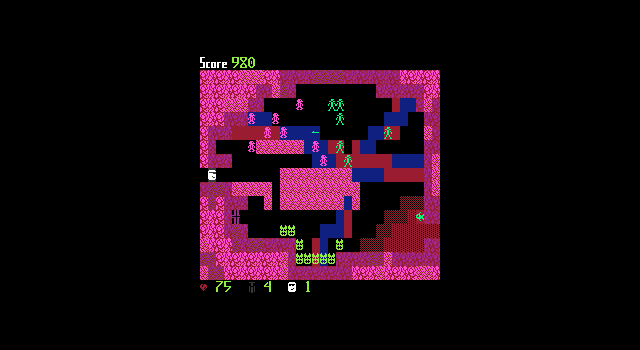 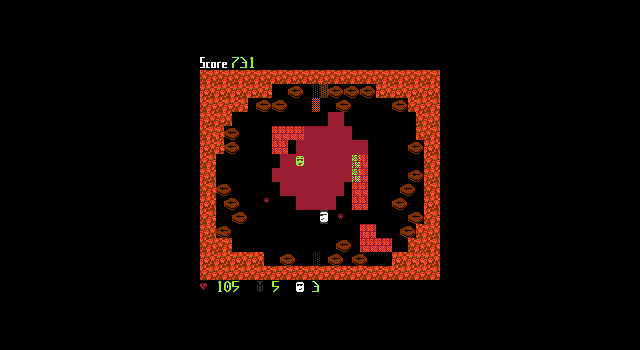 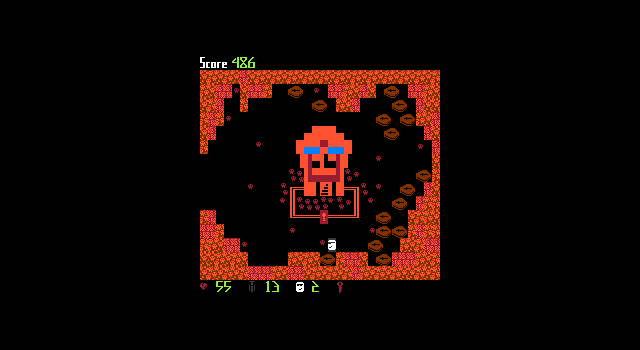  Play online
(slower PCs/tablets may have better results with this link)
Fallen is a Catacombs-style action/adventure game. The game is focused on combat and resource conservation.
Log in to write or edit your review.
Dr Lancer-X ◪ said:
Link
Last modified 2011-10-01 01:59:57
NOTE: This review was written for version 1.0 and may be outdated.
As a genetically-enhanced super soldier, you tire of taking orders from the powers that be that style themselves your masters. Entering a dungeon known for being unwelcome to strangers, you travel deeper and deeper, knowing none shall follow you.

Fallen is a top-down, classic MZX combat game that pits you against hoards of enemies and gives you a perilously low supply of health and lives for the journey. In similar style to titles like Bernard the Bard and Talon's Tale, enemies are edited and animated versions of the standard MZX built-in types. The difficulty is quite high but adjustable by setting the difficulty level (Medium, Hard and -FALLEN-). Medium and Hard give you 100 health to begin with while -FALLEN- gives you 70 and removes all the save points. Medium also reduces the game speed by a quarter compared to Hard.

The game requires fairly careful playing on a number of different fronts, in some ways making this the Ryan Thunder of built-in combat. Health and lives are limited, although both can be restocked- health restocked through pickups, lives restocked through accumulation of score (and the occasional pickup.) Unfortunately, this also exposes you to the odd behaviour of the MZX score system where the score enemies give does not necessarily reflect their difficulty. Ghosts, for example, give no score at all, while the generally pretty harmless fish give 3. Because it is very possible to lose a lot of health and even lives in the space of a second of carelessness, a cautious style of play is recommended. The save system is fairly roguelike-ish- on the two difficulty levels you can save at all on, you are limited to saving at save points which are few and far between. Furthermore, the save points can only be used once and if you die, your save is overwritten.

With the exception of the bosses, all the enemies, pickups, projectiles etc. are built-ins and the game makes highly creative use of them. Enemies and powerups both respawn on most boards (see below), which can be quite handy at times (for collecting additional score to get extra lives and for regaining health through heart pickups) but the areas are generally designed in such a way that it's hard to abuse. You practically need to take advantage of this to get all the bombs you need, though; the game contains many secrets, most of which are hidden behind bombable walls that only sometimes look conspicuous. Some of these secrets just provide some (admittedly quite handy) extra items, while others are far more essential bonuses, like increased maximum health and reduced damage. As such, you'll generally end up bombing quite a lot of walls that turn out not to be secrets, a practice that requires a lot of bombs. They're also occasionally helpful in combat, although you'll mostly be using bullets which are far less hassle and in infinite supply.

The game consists of two main types of location. The first is a maze-like arrangement of single-screen boards, stocked with enemies and pickups aplenty. The creatures and items on these boards respawn, meaning you always have to be careful on crossing the boundary to another board, even if you've just cleared it out. This essentially forms the 'overworld' to Fallen- the entire area is connected, though sections are blocked off with locked doors. The maze connects together the demonic laboratories, which form large, scrolling boards. In these the difficulty level jumps dramatically. While they contain secrets, often hiding useful pickups, the laboratories can only be entered once, so no going back for more. At the end of each laboratory is a boss fight. These are often quite difficult- although there is typically a trick to each fight, unless you're paying extra careful attention (or this is your third reload going against the boss in question) you'll probably end up fighting them normally- an act that can normally wipe out at least one life just due to natural wasteage. The bosses employ built-in weapons against you, but they are frequently used in unusual ways- using fire in a region surrounded by trees, throwing seekers that later explode etc. The bosses employ fairly simple patterns of actions, at least making it easier to tell what's coming next. Defeating a boss then opens up more of the game to explore.

After the final boss, the game concludes after a short series of final 'wrap-up' boards (which, while challenging, are thankfully not as mean as what you've just been through at that point.) There are two endings, based on whether you played the game at the highest difficulty or not.

Not a game for everyone, but it's a novel take on standard MZX combat, it works and there's loads to do here. Recommended if this sounds like your thing.