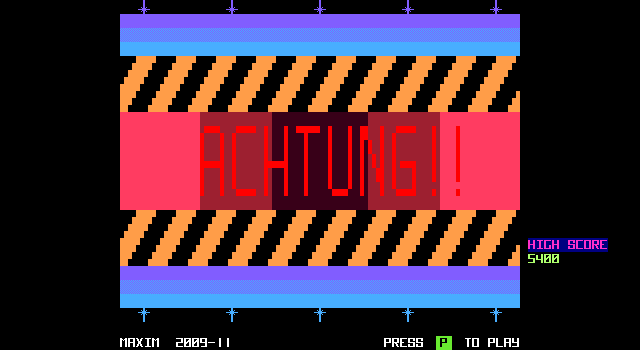 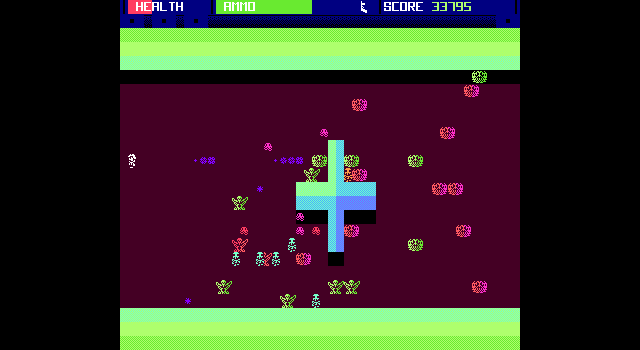 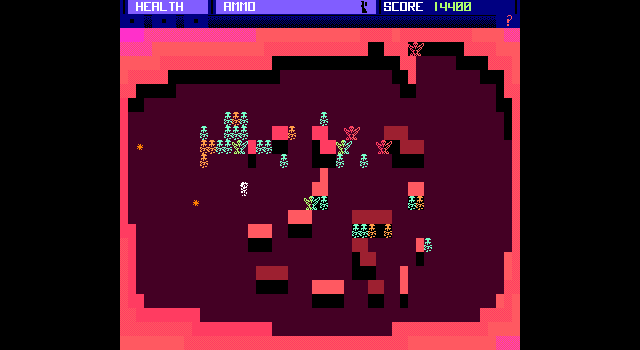  Play online
(slower PCs/tablets may have better results with this link)
Achtung is a fast-paced action game, where you shred hordes of monsters while weaving through a bullet barrage. Just remember, don't stand still... or they'll get you!
Log in to write or edit your review.
Micah ◪ said:
Link
Posted date unknown
NOTE: This review was written for version 1.0 and may be outdated.
Summed up, a very enjoyable game with tons of action. The graphical style is very flashy, but nothing bright stays on screen long enough to induce seizures.

It's very similar to Super Smash TV for the SNES in terms of control scheme and gameplay, and it works very well for this type of shooter. It didn't take long to get accustomed to the controls. There was a nice array of weapons and power-ups; the spread guns proved to be quite fun. The enemies weren't overpowering, the real challenge was competing with the vast number of enemies on-screen at one time.

Most will probably want to turn continues on, because there isn't much chance of finishing the game without dying at least a few times. The game wasn't very long, but I definitely found replay value; I've already played through it multiple times.

The final boss was impossibly hard until I figured out how to get it stuck and shoot until it dies, other than that a very solid release. I look forward to seeing more games in this genre from Maxim. It's a very polished effort, with a few minor changes it could easily be a 5 star game.
Dr Lancer-X ◪ said:
Link
Last modified 2011-10-21 05:43:38
Achtung! is an arena shooter, similar to titles like Smash TV. In standard Maxim game style it involves wiping out huge numbers of foes with a variety of multi-coloured weapons while trying to stay alive.

The plot revolves around the extermination of demons that have infiltrated society on many levels and that other humans cannot see, although this may take a bit to figure out if you haven't read the story from the original DoZ game- the storytelling is characterised as in medias res to an extreme and things are never explained outright - instead, you get snippets in the form of inter-level cutscenes. The actual influence of the story on the game itself is relatively minimal, however - it essentially provides an excuse for shooting tons of enemies over a variety of levels.

Each level occupies a single screen made up of solid blocks (simple, but visually undistracting as it is possible to tell instantly which tiles are obstacles and which are not) that enemies pour into, typically from the sides. As you kill them off, more enemies pour in until they are all gone. You then proceed to the next level. The enemies appear in the level in predesigned patterns.

To hold you ground against the enemies, you start with a basic projectile weapon and can collect others as the game progresses. Firing and moving takes place on two sets of four cursor keys that can be configured to some extent (the default being WASD for firing and the cursor keys for moving) giving you controls similar to the dual stick controls for games like Smash TV. Two different kinds of pickups appear on the level randomly and move around until you grab them- weapons and powerups. Weapons provide you with a (usually) more powerful and more versatile weapon than your basic pistol and you keep the weapon until running out of ammo or grabbing a new one. Powerups provide you with a benefit that typically lasts until you next take damage (with the exception of 'bomb', which automatically denotes after a set duration.) Because these pickups just randomly jump around the screen until they are grabbed, it makes sense to grab powerups immediately (unless you already have that powerup, in which case you will confer no benefit) and weapons after you have exhausted your current one. The five weapons pickups all have different icons, but as they are all different gun designs, it can take some time to associate the gun icon with the utility of the weapon.

Enemies come in a variety of shapes, sizes, movement patterns and durability. Rather than damaging you by running into you, they all use projectile weapons frequently, but not always, of short range. Most of the enemy attacks are far too quick to dodge so proper strategy typically consists of reducing your likelihood of getting hurt by not staying in one place for too long, staying out of the range of your foes and taking out enemies before they can hurt you. Some enemies buzz around a lot and can be quite unpredictable, while others move more slowly and deliberately. You typically want to get rid of the former, first, before moving to methodically taking down the latter.

There are a total of ten levels that pit increasingly difficult foes against you until the last level in which you fight a boss. There are five cutscenes- one at the beginning, one at the end and three as you progress through the levels. You can configure the controls the game uses (to an extent- you basically get to switch between a number of preset configurations) and enable up to 2 continues, allowing you to keep playing even after dying once or twice. While the difficulty of the game is high, strategy and vigilance will typically serve you better than reflexes and anyone should be able to beat this game after investing the time to get a feel for how the weapons, powerups and enemies work. While playing you typically have to focus on 'area suppression'- moving to safe locations and removing enemies that threaten it. As the number of enemies in a level is finite (they do not respawn) and powerups infinite, it is typically better to maintain a slow pace than a fast one.

The music is typical Maxim work- atmospheric, moody music, with a decent selection of tracks (title screen, menu and cutscene music as well as four tracks spread across the 10 levels) and the sound effects are generally fitting and unobtrusive.

The game is not especially long (approximately 15-20 minutes) but is quite enjoyable, well-balanced and challenging and a good time investment, even if it takes some time before you are able to complete it.