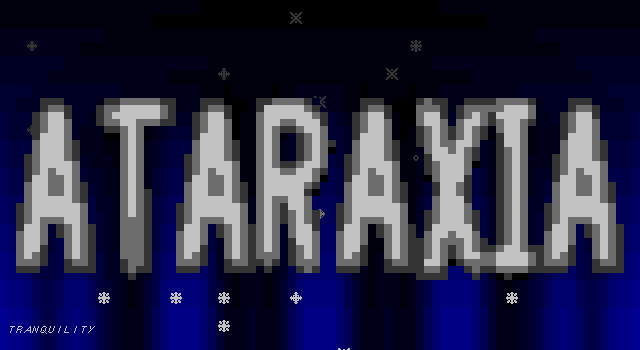 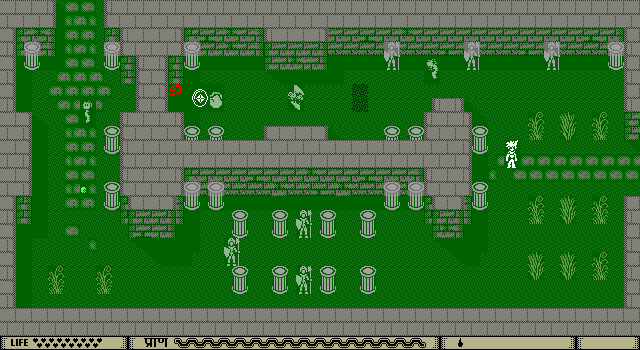 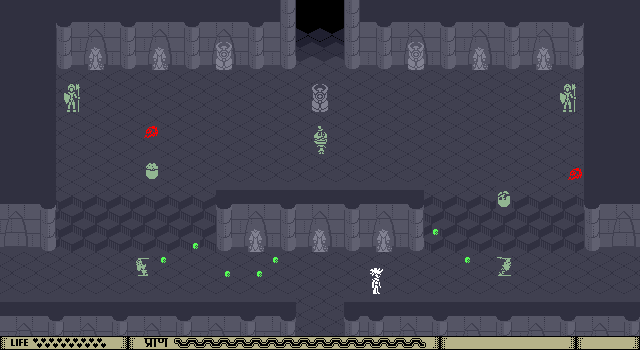  Play online
(slower PCs/tablets may have better results with this link)
No summary available.
Log in to write or edit your review.
Maxim ◪ said:
Link
Posted date unknown
Ataraxia is a game made in 24 hours for a Day of Zeux competition. It's a top-view action-adventure game where you're armed with a sword and a few spells.

The action on the sword weapon is excellent. It's probably one of the best implementations of a sword I've seen in Megazeux. In the middle of a swing you can continue to move around, and the weapon has a large damage radius. The spells have cool effects and are needed in some places to advance to a new area. To input a spell you hold the control key and press a combination of up to three of the keys Z, X and/or C. When you release control the spell will activate.

There's only a few enemy types but they are more than sufficiently varied in behavior, and present a decent challenge. Hitting enemies restores a very small amount of health and spell points, but getting hit by an enemy projectile does a large amount of damage. Spell points will regenerate over time, but very slowly unless you're attacking enemies as well. It's a pretty tasteful regeneration mechanic, actually! I'm impressed.

Too bad this game isn't longer. It takes around 20 minutes to complete, but its design is impressive enough that it would work around a game that took over an hour to win. Also, there's a pretty serious bug where if you leave the board connecting to the castle area and then re-enter it, you'll be warped to the start of the final dungeon. You can effectively skip a whole part of the game.

And the final boss, however aesthetically impressive, does not present any challenge either. It doesn't actually attack the player, and can be killed without any effort. You can tell this is where the team was running low on time when making this...

The aesthetics here are incredible. Between Quasar's graphics and Lancer's graphical effects, the game looks about as good as a Megazeux game can. It's mind-blowingly good. Music and sounds are appropriate for the game. I really like the first area's music. For a game themed around "tranquility," the aesthetic is fitting. Most of the palette is muted colors, and the music is a lot of new age sounding stuff.

Great game, despite its flaws. I recommend it highly, especially to anyone looking to make an action-adventure game where you use a sword--this is a good example to follow.