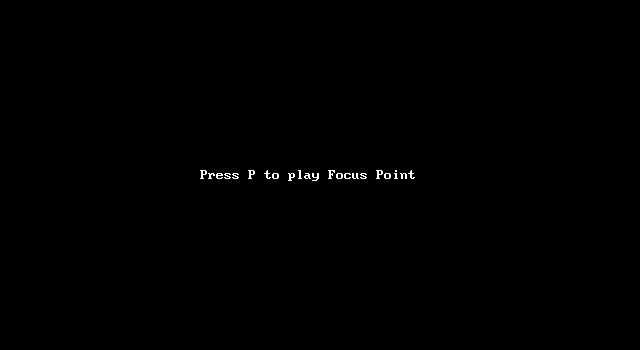  Play online
(slower PCs/tablets may have better results with this link)
No summary available.
Log in to write or edit your review.
Kuddy ◪ said:
Link
Posted date unknown
Yeah, I take the blame for goading Lancer into making this. This was almost immediately after he released Black Cat OP, and the Rickroll just so happened to be a new meme at the time, so I suggested that it'd be kinda funny if he converted that to MZX under the guise of finally "releasing" Focus Point, an ambitious older project of his. It got a few laughs upon release, and now it's somehow become rated high enough to be a Random Game of the Moment ever since that was introduced.

While this was a very impressive showcase at the time, it has not aged well at all. Not only has the Rickroll obviously long since worn out its welcome by this point, but because of the video's length, it falls very badly out of sync after a minute or so. Lancer has since made a much better and visually sharper AVI converter, though I don't remember its name off the top of my head.

I can't really recommend downloading this, but I guess it's a must have if you still think "O RLY" is comedy gold.
Maxim ◪ said:
Link
Posted date unknown
I'm not even gonna touch this one.