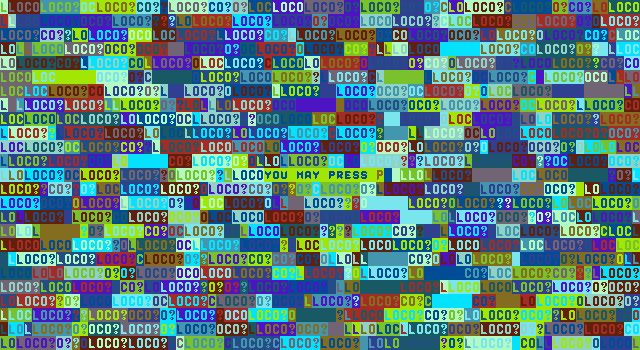 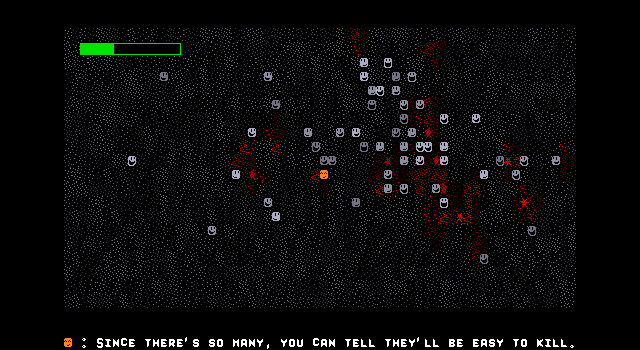  Play online
(slower PCs/tablets may have better results with this link)
Note: displays errors in MZX versions prior to 2.92.
Log in to write or edit your review.
Goshi ◪ said:
Link
Last modified 2012-05-16 23:55:54
Loco is best described as "Everything wants to kill you".

The game features two ways of attack, a sword and a some weird uh... things which you throw at enemies. In sense the weapon system works exactly like that of Emo Maggot Freak 2, only without the limited ammo. The game then pits you with these small forms of offense against large swarms of enemies. These enemies can be anything from guys with sunglasses, to the imfamous ZZT brand border to even MZX Brand Transporters. Because the large swarms of enemies and the limited weaponary the game is quite challenging. Also as a flash of variety the game also features a few platforming sections. These sections aren't really anything interesting though as most of the gameplay is dedicated to killing everything in sight.

As for graphics the game fares as average. Most of the time you'll just end up seeing a bunch of greys really. Some boards flash different colours in an attempt to make the game seem more birght and colourul but it only ends up being an eyesore.

The music is pretty much random weird songs that occour to suit the theme of the game. Notable mentions include the "Badger badger..." song, the final battle theme and several others.

The storyline is another of the games weaker points though. The game simply as no sense of direction whatsoever. Your just doing all these things for no reason whatsoever. Considering how random the game is though this isn't so much of a problem.

Lastly this game has it fair share of bugs. The player is moved by robots so as a result it is quite slippery to move him. This makes it quite difficult to avoid and attack things. Also when you die you don't get straight to the death board; instead you just end up right at the ending.

The death issue the other reviewers address is fixed in this version; zombie patched it soon after discovering it.

As for the game itself, it's a refreshing blast of cold air in the MegaZeux scene. It's not necessarily unique or different, but it's downright FUN. Fights are frequent and HUGE, often following the Serious Sam technique of no AI and wide open spaces chock-full of waves of varying enemies. If that didn't help, the "aw shucks" attitude of the whole game adds to the atmosphere as well. Sidescrolling areas and a little bit of wandering help stop monotony from taking root.

Music is nicked from various familiar sources (The Office, BADGER BADGER, classical, The Chicken Dance and other stuff like that). All fits the easy-going mood. The sounds are basic but serviceable.

About the biggest negatives are its relatively short length and its filesize. Modem users should probably give this a look-over, but the pain of setting aside ~8MB of bandwidth on a modem may cause pause.

4.75 stars (rounded up)
nupanick ◪ said:
Link
Posted date unknown
Nice. I think this was the first MZX game I played. Basically, no limit to ammo, shoot everything. A lot of stuff responds when you shoot it and nearly everything can be destroyed.
Mr. Apol ◪ said:
Link
Posted date unknown
zombieguy is a hero. loco is a brilliant deconstruction of megazeux and zzt and is pretty genius in its execution (the zzt board in particular). zombieguy, this is my favorite megazeux game right now. good job, i didn't know you had it in you.
zanzindorf ◪ said:
Link
Posted date unknown
this is a fun game, even more fun if you've ever played zzt.not a big fan of the blood splatering everywhere but over all it's a good game. but half way through the game it started to run real slow,
maybee my computer is just old though. 4\5 stars