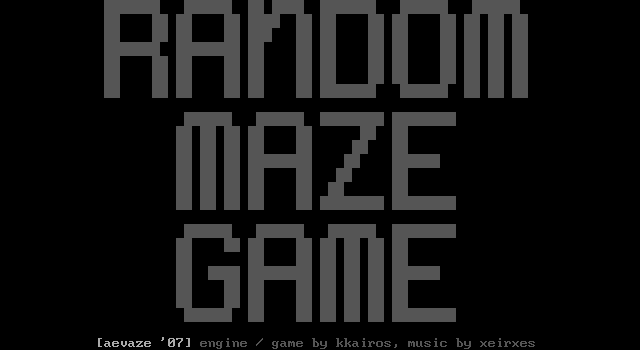 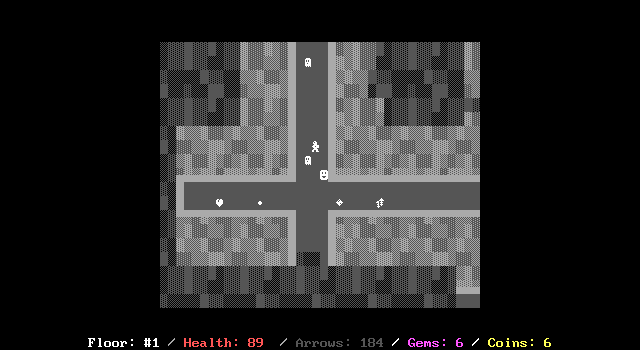  Play online
(slower PCs/tablets may have better results with this link)
Basic random maze game. Not that great. [Approximate release date from files as retrieved from dMZX on 10/17/2012.]
Log in to write or edit your review.
Maxim ◪ said:
Link
Last modified 2012-10-18 06:49:19
Random Maze Game is... it's a random maze game. You wander around and fight enemies in traditional Megazeux combat, in narrow corridors. The maze generator itself is pretty good, but also a bit too simple to have any major problems. It's kinda like Nytar's Random Maze 2, down to having unvisited parts of the maze obscured. Except this one has an end, after five levels...

Combat's pretty easy, you're not put up against any shooting enemies. However you can take a few unavoidable hits if you're spawned in a new maze next to an enemy. It's kinda cool that there's gems and the game uses thief enemies, but there was a missed opportunity to give the player a special attack that consumes gems or something like that... You only have one life, but can store up to 200 health and there are health items everywhere.

Graphics are basic and there's few edited tiles, really almost as basic as it gets. There's an original song composed for the game, which is pretty good... but unfortunately it's way too short and you'll hear about 50 repetitions of it by the end of the game. Having 2 songs and alternating between levels would have helped...

It's not really a bad product, but also is too short and basic to merit more than two stars. Play Ruin Diver 3 instead for a much better example of a KKairos game with a level generator.
SuperGuy0981 ◪ said:
Link
Last modified 2015-07-27 00:02:00
I REALLY liked it, just having to fight enemies in a maze sound quite outstanding! Brings a new challenge when new mazes are generated.

I really also liked the fact that you added the GUI at the bottom too. Thanks to you, I turned over a new leaf with the gameplay too!

One thing I maybe would improve on (up to you if you want) is have more random mazes and have 10 floors instead of 5.