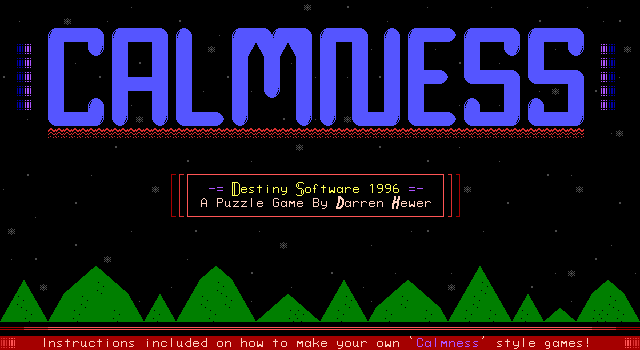 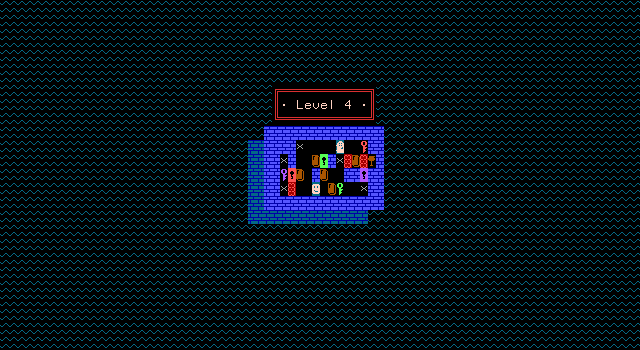  Play online
(slower PCs/tablets may have better results with this link)
No summary available.
Log in to write or edit your review.
Pyro1588 ◪ said:
Link
Last modified 2012-05-16 23:49:13
This is a classic puzzle game by Darren Hewer, created for Wondercow's game-making competition.
Anyway, the goal of the game is to get all the crates pushed onto markers while trying to get around various obstacles. It has nine different levels and even includes a tutorial on how to make your own Calmness levels.
This is a must-play for everyone. Wonderful game and good music.
djtiesto ◪ said:
Link
Posted date unknown
An awesome and fun puzzle game. Pretty simplistic in concept - fans of Sokoban will feel right at home, but is aided by that knack for good music Darren Hewer has. Only complaint is that it's very short, and not terribly challenging.
VinceP ◪ said:
Link
Posted date unknown
A great game, very addicting and well-programmed. Towards the later levels, it requires lots of thinking. Clearly a puzzle-lover's dream.
Terryn ◪ said:
Link
Last modified 2012-05-16 23:48:53
NOTE: An ancient review from DMZX's golden days, revived for your pleasure.
--------------------------------------------------
Calmness is an old puzzle game made for Wondercow's game competition. The object of the game is to place all of the blocks in a level on the starred spaces. In case you want to make games like it, Calmness even comes with a tutorial on how to make Calmness-style worlds.

Graphics
Calmness is one of the really good games that is largely ignored by all newer MZXers (and several older ones). It's a solid download that may only last for a short while, but at least it'll be a fun playthrough.

They're smiley graphics; remember, though, that Calmness is over four years old [editor note: nine now] and made in the prime of smiley games. The parts graphics look exactly like what they represent, and the windowing (fortunately, since the playing field is somewhat small) is easy on the eyes. [6]

Music/SFX
The music was okay, fitting in well enough. However, the two mods' most redeeming point was the fact that they are unique to this MZX game.

Game Play
The idea of the game is fairly original- place blocks on specified spaces without getting trapped. There are many obstacles and unique pieces, such as balloons, boulders, teleporters, and even acceptable use of built-ins such currents and locked doors.

For being a puzzle game, this was pretty simple for me; then again, I shot through Lolo... oh well. I still think it's a bit easy. [8]

Replay Value
Once the puzzles are known, they're known; there's not much replay value in this one. [4]